No+Vello customer opens her own centre in Slough

We’re pleased to announce the opening of a new No+Vello clinic in Slough. The new centre opened its doors in the first week of November, and occupies a fantastic position just off the high street that’s easily reached by foot or by car.

The franchise owner, Andreia D’Silva, was no stranger to No+Vello’s flat rate IPL treatment when she decided to 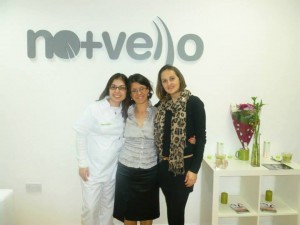 purchase her own No+Vello business. Before moving to the UK, Andreia had used our services as a customer in Portugal. Impressed by the treatment’s effectiveness and cutting-edge approach to beauty treatments, she jumped at the opportunity to open her own centre.

Andreia explains: “I’d always been a fan of No+Vello and their offering. So when I saw the opportunity to open my own business in the UK, it made perfect sense. Generally, the UK are a little behind the rest of Europe in their awareness of IPL hair removal, so it’s great to be entering into a market with so much growth potential.”

Andreia’s prediction is reinforced by the fact that there are now over 1,300 centres in 16 countries. When you consider that the first centre only opened in Spain in 2007, it supports the idea that the demand for permanent hair removal is on the up. Just like Andreia’s business:

“Business has been steadily growing since I opened four weeks ago,” Andreia says. “I realise it will be a gradual process to begin with, as it is with any business just starting out. But I have had a fantastic response from my clients so far and I’m excited about what the future holds – for my own centre and No+Vello in the UK as a whole!”