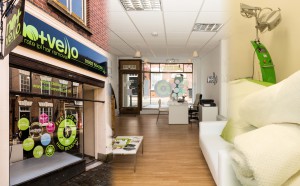 no+vello clinics are opening across the country to take advantage of the business opportunity represented by this established beauty treatment.

At the start of the year, the fast growing franchise network no+vello set the ambitious target of establishing 18 new UK franchise owners in 2014 – but it’s a target they are well on the way to achieving. After originally launching in Spain in 2007, its cutting-edge IPL treatment became a phenomenon – the network just grew and grew.

In just 6 years you could find a no+vello clinic in 16 different countries around the world.

Since the first UK clinic opened its doors in Croydon, this trend looks to be continuing in the UK with network continuing to go from strength to strength. In 2014 alone, three new franchise clinics – in Hove, Wolverhampton and Fareham – have already been fitted out and opened their doors to the public. With another three clinics set to launch in a matter of weeks in Southampton, Nottingham and Romford, it’s clear that people are recognising the potential of the no+vello opportunity and that they are well on target to meet their ambitious target.

“We have always been an ambitious business,’ says Matthew Simmonds, no+vello’s UK Managing Director. “After seeing the incredible growth achieved in Spain and the demand for IPL hair removal, why wouldn’t we be? The opening of six new clinics already in 2014 is a clear indication of how our business model is financially accessible and viable.”

This impressive growth is showing no sign of letting up. In fact, the no+vello head office currently has a strong suite of candidates at the latter stages of the franchise recruitment process.

Having now established the brand and set the model for the UK market, Matt is confident that the UK network can emulate the phenomenal growth seen in other European markets. However, he’s just as pleased that people are enjoying the opportunity to run their own no+vello clinic.

“Obviously, we’re pleased that the brand is capturing the imagination of both franchisees and customers,” adds Matt. “But what’s really exciting me is getting out there and visiting the new clinics. It’s so satisfying to see people putting the model into action and achieving the careers they want. With this level of ambition and commitment, there’s no reason why anybody can’t build a successful no+vello business.”